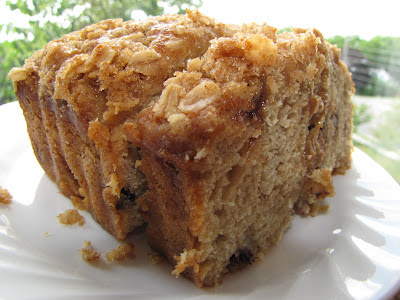 Last month I shared my tried and true banana bread recipe.  Since then I have had many people tell me I have it all wrong. That I am not the banana bread queen I thought I was even {though they have been willingly requesting my loaves as barter for various goods and services all these years}.  What is the hoopla?  Apparently most of my friends don't mix their mashed bananas with the wet ingredients.  Instead they fold them in at the end, just before baking.  I set out to find out what difference it would make in the final product. Only one friend could answer that.  She believes that over mixing the banana would result in a "wet" loaf because the banana is broken down too much.  I have never had this happen with my recipe, but decided to try it their way at least once.

My by-weekly banana bread day came and I tried mixing the mashed bananas with the batter right before baking.  Guess what? The crust looked lovely, the cooking time was not affected, but as soon as I cut into it I knew something was wrong.  This alternative method resulted in a wet loaf with globs of uncooked banana. It tastes good but it's not my usual barter worthy banana bread.

Verdict:
If the recipe isn't broken, don't try to fix it.  The alternative mixing method may have worked with a different recipe, but for now, my original recipe still stands true in my home.

I'd love to know where you stand in the banana bread debate?  Do you mix your mashed bananas with the wet ingredients at the beginning or with the finished batter at the end?

Want more recipes? Life Made Delicious is packed with them.

gibberish said…
I've been making banana bread for too many years to count & I make it the same way you do, mixing the mashed bananas in with the wet ingredients. I think it makes for a superior texture. You get my vote!
July 10, 2012 at 8:11:00 PM EDT 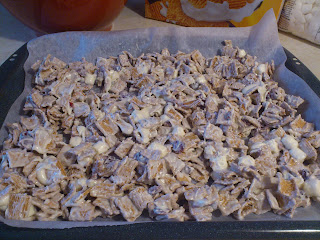