I recently lived a dream come true!  My sister-in-law called and said she had tickets for Tales From The Street, a live show featuring Coronation Street actors.  For those that aren't familiar, this is the longest running British Soap.  We got VIP tickets to meet the actors and had front-stage seating for the live show.  It was an evening filled with laughter and reminiscing about Corrie characters that the fans have grown to love and hate. 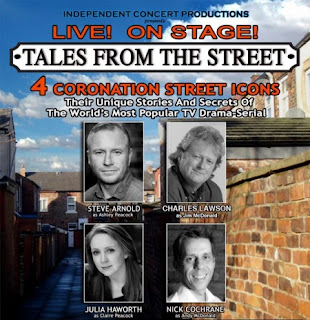 The meet and greet, {which I didn't know about until I got there, thanks Cindy} had me sweating in the line up. I had no idea I would be meeting the stars and was not glammed up for pictures. Besides that it was pouring rain that night and I looked a mess!  Nonetheless, I met them, and found they were kind and friendly. I'm sure they won't remember me anyway after the sea of people they will meet on this North American tour.
The live show was a hoot!  Moderated by Nick Cochrane {Andy McDonald} the first act was filled with anecdotes from the seasoned Corrie stars.  It was great to have a group of actors that had been on the show a long time ago, and others who had just finished shooting a little more recently.  They gave behind the scenes information, and chatted about some of their favourite story lines and plots.  The second act of the show was made up of audience questions.  There was one question that the actors shied away from answering; "What character do you hate the most, and would love to see leave the show?"  That is a loaded question for sure and I held my breath waiting for an answer.  The gentlemen declined to answer.  Julia Haworth {Claire Peacock}piped up with a gracious answer; "If there is a character that you want to wallop it is a testament to how talented the actor is portraying them.  Every actor and character has a proper place on the show." 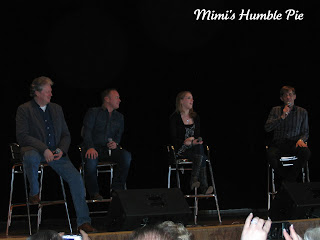 Charles Lawson {Jim McDonald} really got into the show and commanded the stage. He didn't hog the spotlight, but he wasn't shy when it was his turn to speak!  His younger cast mates teased him for being the "Senior" member of the cast, but I could tell there was a tremendous amount of respect behind their 'elbowing'.  He told us about being recognized by a teenager who had set out to mug him a few years ago.  When he realized he was talking to "JIM MCDONALD" he ran away.  Lawson credited the move towards adding younger actors to the show, as a great way to bring this generation closer to Corrie.
The audience was made up of teens, adults, and seniors.  Entire families came out to see Tales from the Street and expressed how they sit together to watch Corrie every night at home. Overall, it was a great night!  I had a hard time sleeping because I was so excited about everything I had seen and heard.  I would recommend that EVERY Corrie fan check out this tour if it isn't too late! 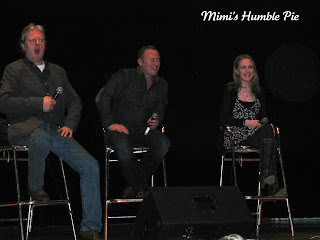 I want to send a big thank-you to Independent Concert Productions for setting us up with Tales from the Street tickets.  It was an honour to attend this wonderful show!

Visit www.talesfromthestreet.biz for more information and to find a tour date in your area.

*This is not a sponsored post. All opinions are my own.  I received complimentary tickets but this review was not required, I wrote it because of my love for Corrie!  **Poster image borrowed from www.talesfromthestreet.biz
Email Post
Labels: events promotion Special Event Posts