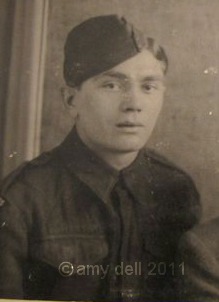 As far as I know, no one in my own family has ever served in the Army, or done any sort of military service.  My husband has been doing quite a lot of family tree research and found a long line of men who served among Armed Forces on behalf of Ireland and England.  His paternal grandmother had always said her brother Bill ran away to join the Army during the Second World War.  She moved to Canada in the 60's and they lost touch.  These are some of the ONLY pictures Nan had of her brother Bill.
Earlier this year hubby searched for his Great Uncle, and found his son's family instead.  Uncle Bill had passed on, but reviving contact with his son was a great thing for us and for Nan. We wished we could have met him and known more about his life. Other revelations have surfaced from the family tree research.  He knew that his maternal grandfather had served and been injured in WW2.  His great- great grandfather had also served England, but in the First World War.  Long lost journal entries describe the terrible symptoms that stayed with him for the rest of his life.  He was never the same after witnessing mates die and he experienced terrible headaches and shakes from being gassed.  We cried for a man that has been gone since the 1930's.  In light of these findings, I found myself especially emotional in the weeks leading up to Remembrance Day. Walking up to every veteran seen standing outside stores and businesses with a donation box and poppies.  I couldn't walk by without giving a firm handshake and thanking them.  I could tell that some of them were accustomed to being ignored.  Many have fought for us to have the freedom we take for granted (me included) every day in Canada. For some reason the veterans who live to tell the tale are not acknowledged often enough as hero's.  Witnessing war first hand and then walking away to a "normal" life is no simple feat.  So I'm saying it today..no matter how I feel about war...THANK YOU for laying your own safety on the line to protect and preserve mine.

The Ode of Remembrance:


They went with songs to the battle, they were young.
Straight of limb, true of eyes, steady and aglow.
They were staunch to the end against odds uncounted,
They fell with their faces to the foe.
They shall grow not old, as we that are left grow old:
Age shall not weary them, nor the years condemn.
At the going down of the sun and in the morning,
We will remember them.
Lest we forget. taken from remembrancedaycanada.com