What Every Parent Should Know: Is Your Pet A Carrier For Illness? 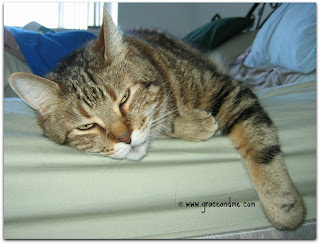 When I was a kid my mother would never allow our family pets into the main common areas and bedrooms of our home.  She claimed that they were dirty and would give us all sorts of sickness, especially if they shared a bed with us.  I always thought those warnings were just her way to keep the cat and dog fur out of her living room, bedroom, and kitchen.  As you can see from the pictures, our Fat Boy, Meow Meow, practically owns the place and sleeps in many areas of our home.  After a three week bout of Salmonella poisoning, affecting my toddler and hubby, I'm wondering- Did my mother have had a valid point after all? 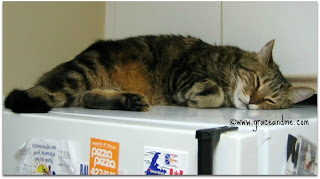 I recently sat through a 30 minute lecture (from a well-meaning official from the Health Department) about the common ways people pick up Salmonella poisoning.  After He practically accused me of giving my kid a raw chicken leg and letting her play in the dirty kitty litter box, he went on to say that many cats are carriers for the salmonella bacteria.  WHAT? I had heard of other pets like reptiles and chickens being carriers, but not cats or dogs.  Of course I knew that kitty litter carried nasty things and would be dangerous for me to change while pregnant (see the link for toxoplasmosis).  I also knew it would be a source of curiosity for our daughter, so Kitty's litter box is in an unused storage room with no access for our girl.

Food can also be contaminated with Salmonella bacteria: which is why I own a food thermometer and am very careful with having HOT foods HOT and COLD foods COLD.  Contaminated utensils and platters are swapped out when food is cooked.  But still, illnesses can find you when you least expect them.  Princess Destructo's symptoms began on the Labour Day Monday evening, which means she was exposed to the bacteria while we were on our road trip.  It will be nearly impossible to track the source, after staying in the homes of two different families that both have pets, and eating at two different restaurants.

We are still allowing our Meow Meow to sleep in bed with us. Moe, from the Health Department seems to think that our daughter didn't get Salmonella from our cat.  He is 13 years old and doesn't allow her to have close contact with him. She most likely got it from one of our friend's kittens or from something we ate at a BBQ Party or restaurant.

I was wondering if anyone else out there has had similar experiences with Salmonella? Did you know that cats and dogs could be carriers? Do you let your pets sleep in bed with you and/or your children?