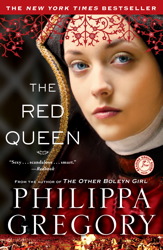 I was thrilled to learn about the August selection for my Book Club.  I LOVE historical fiction, so my expectations were high.  Before I received my copy of The Red Queen (2010), I did a little research about Philippa Gregory.  I knew The Other Boleyn Girl, was in her writing credits.  But soon found out The Red Queen is part of a series, with The White Queen (2009) preceding it.

Though this book is part of The Cousins War series, The Red Queen can stand on its own two feet.  Gregory shines a light into the darkest aspects of 15 th century life.  At first the trials of Margaret Beaufort evoke sympathy from the reader.  Filled with visions of her hero, Joan of Arc, and childish notions, Margaret is subjected to arranged marriage at 12 years old.  Her husband is a 25 year old man who is less than gentle with her.  Margaret is forced to grow up fast as she endures life-threatening complications from childbirth at age 14.  Margaret's own mother told her that she would never have a say in how her life should be governed. How does a young girl achieve her hopes and dreams when the odds are stacked against her?


Women really seem to have quite a bleak existence during this era.  Compared to the leaps and bounds of women's rights today, 15 th Century practices appear barbaric.  I found myself getting bogged down in the atrocities that women had to endure.  Then the reader is left wading through the circumstances created by Margaret's campaigns to be Queen Mother at all costs.  Don't let the harsh realities distract from the main character's exceptional strengths as a heroine.  I have to admit my early sympathy for Margaret changed to contempt at some of her choices.  But soon became captivated by the fierceness by which Margaret Beaufort holds to her convictions.  She is devout in her prayers, and resolute in clinging to her Truth at all costs.  She believes that her family has the purest Royal bloodline.  And devotes her life to protecting her Son until he is old enough to command his rightful place as KING.

I am genuinely looking forward to reading the next book in The Cousin's War, The Lady of the Rivers.

*I received a complimentary copy of The Red Queen, for purpose of participation in the Everything Mom Book Club, courtesy of Simon & Schuster Canada.