Super Sticky "Bet You Can't Eat Only One" Cinnamon Buns.

I made these one cold and rainy day in Newfoundland.  And again on a hot, humid day in Ontario.  This is a versatile recipe.  I like mine fragrant, but you can reduce the amount of cinnamon in the Cinnamon Spread to 2 or 3 Tablespoons instead of 4 TB.  This recipe has been updated to yield a little more of the Sticky Topping because we can always use a little more sweetness.  Recently, I accidentally jumped ahead of my recipe and poured the Sticky Topping on BEFORE the rolls had risen the second time.  They turned out okay, and I would have eaten them anyway.  Geesh, can't let warm cinnamon buns go to waste! 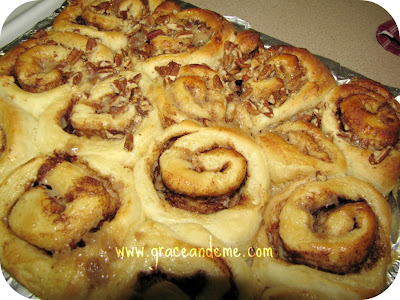 
Try not to over bake, they will continue to cook when taken out of the oven. I get anywhere from 12-16 rolls from this recipe. It depends on how well the dough rises for me.

﻿ ﻿
Cinnamon Spread:
Combine/
Sticky Topping:
Combine/gently warm together
Hint: I use a microwave safe bowl and pop it in for about 30 seconds to start. Be careful it can get hot and/or bubble over really fast.

Optional Icing Glaze:
Combine enough milk to give the desired consistency.  It should coat and stick to the back of your spoon but still be thin enough to drizzle.

Options:
Make these with or without the pecan halves....
Add 3 Tablespoons of Maple syrup to the Sticky Topping mixture...
Omit the Sticky Topping altogether if you want plain Cinnamon Buns...
If you omit the Sticky Topping drizzle with Icing Glaze when buns come out of the oven & have cooled....
Skip the Cinnamon Bun part and just make a home-fresh loaf of Sweet Bread instead...
* update to recipe
Email Post
Labels: bread cinnamon buns Health and Beauty Life My Giveaways Parenting Themes Product Review Recipe List recipes Snacks

East9thStreet said…
I am drooling over these! New follower from http://east9thst.blogspot.com. Found you through the Finding New Friends bloghop. Guess what I'm making on Sunday??!! Thanks for the recipe!
June 3, 2011 at 3:28:00 PM EDT